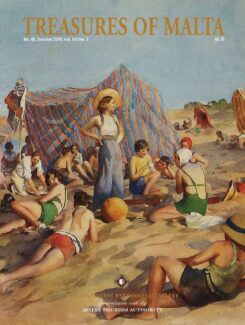 The Chapel of San Ġakbu rediscovered?
Having discovered in 1996 the ancient chapel of Santa Marija ta’ Callus, Alain Blondy is confident he has now discovered another chapel in the area of Wied ir-Rum, that of San Ġakbu (St James the Apostle)

Malta Story (released 1953) – The Director’s Cut
Made and released in the early 1950s, Malta Story was a major feature film that reminded everyone of Malta’s ordeal during Word War II.  Allan Smith here tells the story of the making of the film, of the main actors, and even of some of the Maltese extras in it

The Busuttil Artists – A Legacy of Three Generations: An Exhibition in Gozo
Bernadine Scicluna, one of the curators of the exhibition, gives an overview of a recent exhibition featuring a family of artists who flourished between the late 18th century and the early 20th century

David Roberts R.A. (1796-1864), Victorian Painter of the Orient who visited Malta
Carmel (Lino) Cutajar writes about the great Victorian artist David Roberts, with special reference to his visit to Malta in 1839

Malta Views in a German Palace – Balí Flachslanden’s art treasures in Dätzingen
Thomas Freller discusses a set of paintings depicting Valletta and its harbours, carried out around 1770 and argues that they are in a style already going out of fashion at the time

Recent Acquisitions by Heritage Malta for the National Collection