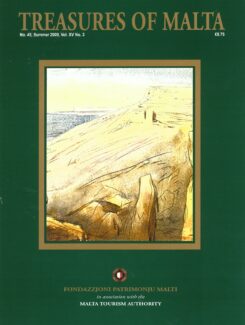 Faces from Valletta’s Colonial Past: A Collection of Figurines by Pawlu Scicluna
Pawlu Scicluna (1855-1933) was a gifted maker of clay figurines unknown to most.  Catherine Tabone gives a lively account of the man and of his large opus that can be viewed at the Inquisitor’s Palace, Vittoriosa

St Mary Tower – Comino
In this, the sixth and last in the series of pull-out drawings with commentaries, Dr Stephen Spiteri gives an account of the history and of the structural characteristics of St Mary Tower on the island of Comino

A Visit to Malta by a 17th Century English Naturalist – Part I
John Ray (1627-1705) is a great name in the history of British science. David Diandra gives a detailed account of his visit to Malta in 1664, of which this is the first part

Caring for works of art on paper