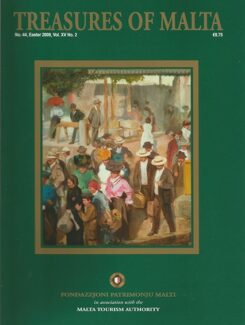 Għar Gerduf rediscovered
Godwin Vella examines what the existing remains and accounts of it written in the past, tell us of Għar Gerduf in Gozo and makes a case for the need to save it from impending collapse

St Helen Gate, Bormla
In this, the fifth in the series of pull-out drawings with commentaries, Dr Stephen Spiteri discusses the handsome St Helen Gate in Bormla

The Villages of Malta
In this second part of his article, Brian W Blouet discusses Malta’s lost villages and the emergence of large rural places

The Muxrabija-Window
Robert Galea gives a detailed account of the muxrabija-window, an architectural feature now rarely seen in Malta and Gozo

Churchill’s “Maltese shield”
Douglas Austin tells how a splendid but little-known work of Maltese silverware was made as a gift for Sir Winston Churchill and may still be seen at Chartwell, Churchill’s home