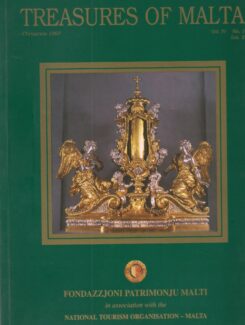 Dominic Cutajar shows us round the Museum in South Street, Valletta

Albert E Abela tours the Supreme Council Hall and the principal staterooms in the Palace, Valletta

The Gardens of Sir Alexander Ball

The Beheading Motif in 17th Century Art in Malta

The Gobelin Tapestries in the Grand Master’s Palace

Michael Shaw delves into the background of the beautiful Gobelin tapestries

The Language of Symbols

Nicholas de Piro examines the use of symbolism

Joseph Galea-Naudi and Denise Micallef write about some wonderful woodwork

‘All the Bells of Heaven May Ring’

John Zammit listens to some of Malta’s bells

A note based on research by the late Maurice Agius-Vadala’

An Attempt at Papyrus Production in 1785

Chris Grech writes the story of the family house in Mosta