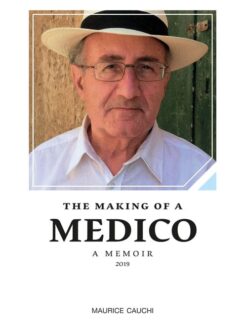 This memoir covers a period of over eight decades, starting from a near-idyllic life in Gozo, through a strenuous, even challenging period at university, followed by further education overseas. While this is where the history of an average ‘medico’ normally ends, for emeritus Professor Cauchi it is really a beginning of a varied career, involving not only cancer research, involvement as leader of the Maltese as well as the general ethnic community in Australia, broadcaster, lecturer, writer of monographs on medical and social issues, contributions to scientific journals as well as newspapers in Malta, and finally, when arthritis interfered with playing the piano, he started playing the cello at the age of 79, and managing to achieve a reasonable level of expertise in that area also.

This memoir covers these many aspects of a person who has contributed an enormous amount of effort, time and energy to the community through his continuous involvement in many aspects of life, both in Malta and overseas.

1 review for The Making Of A Medico – A Memoir