Slavery Malta At The Crossroads. 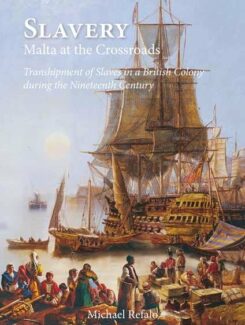 Slavery Malta At The Crossroads.

Slavery Malta At The Crossroads

On 28 September 1871 an anonymous letter in a local newspaper complained that slaves from North Africa were being landed in Malta for later transfer to the Levant. That letter led to a parliamentary question in the House of Commons and open a can of worms for the British administration in Malta. Both the Foreign and Colonial Offices in London and the Malta governors had to seek a solution to the thorny problem. All efforts to stamp the practice, however, proved frustrating for the local administration; the only consequence being accusations of negligence or connivance from British consuls in the Levant. Furthermore, such incidents provided the French-born American consul in Tripoli with ammunition to attack the British authorities in the attempt to push the interests of his adoptive nation. Additionally, the book deals extensively with the plight of the slaves landed in Malta, and the interests and ambitions of their owners.

Be the first to review “Slavery Malta At The Crossroads.” Cancel reply