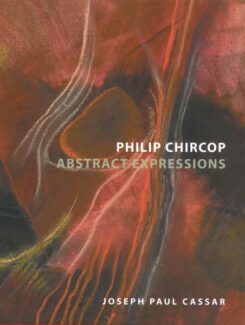 ISBN: N/A. Categories: Home Out Of Print, Out of Print (copy in stock for sale).

Philip Chircop is a key figure of abstract art in Malta. Soon after completing his artistic studies at the Malta Government School of Art, Valletta in 1969, he felt a natural urge to embark on a personal journey of self-discovery free from the ties that restricted him from simply basing his art on objective reality. He explored the world of colour, shape and form through a process of selection, striving to reveal the hidden relations between things. From the onset he embraced the need for intuitive research which required working with an abstract visual language, as opposed to seeking the imitation of the appearance of things. His abstract expressions show unprecedented freedom and imaginative response; a natural condition that makes use of arbitrary colour schemes, vehement brush-marks, exaggerated rich textures and collage. With these tools at his disposal, Philip Chircop felt empowered to seek and approach the threatening void of an empty canvas, always ready to search for the image of ultimate fullness, realizing that behind the visible was a whole world of the invisible, a world of strange untapped forces waiting to be explored and comprehended. This study traces his jumble beginnings, his determination from a young  age to engage in the world of the visual arts, his innate talents and his rise and involvement in the struggle for modern expression in an island that favoured traditional and conservative thought and principles. The power of Philip Chircop’s abstract paintings lies precisely in its ambiguity. It seems to refer to everything and to nothing simultaneously. The hold on specific everyday imagery is forever gone, loosened up by an artistic philosophy that expresses a shift from outward-looking to self reflecting. Sometimes the viewer experiences a sense that Philip Chircop’s abstract paintings are artworks full of decisions. Nothing is there if it is not meant to be there. Anything superfluous is eliminated. Many times his art becomes the surface for resolving visual problems. Philip Chircop collaborates with the driving force that compels him to do art to discover the never-before-seen. The book provides a critical analysis of Philip Chircop’s participation in various prestigious visual and high profile cultural events, held both in Malta and abroad such as the”Contemporary Maltese Artists Exhibition” organized by the Artists’ Guild held at Pacem in Terris Gallery in New York, 1970 and the “Exhibition of Maltese Art” held at Woodstock Gallery, London in 1977. Reference is made to his involvement as an active member of modern art group Atelier’56 since 1970, the Artists’ Guild since 1969, his active participation in all the Triennial Art Exhibitions organized by the Malta Society of Arts, Manufactures and Commerce, as well as at the Malta International Festivals held in the Trade Fair Grounds in Naxxar, the Cathedral Museum Mdina, Gallerija Fenici, Dar l-Emigrant, the Royal British Legion, the Maltafest series held at the Mediterranean Conference Centre, the Malta Biennial, the Malta Union of Teachers, Manoel Theatre, the Round Table Malta and Galleria Zodiaco, Sicily, among others.

Philip Chircop adopted abstraction as the realism of our time. He simply continues to work out of passion. The best way to appreciate Philip Chircop’s works is to experience them. With over 200 illustrations, a detailed chronology and list of personal and collective exhibitions, this book provides the best opportunity.