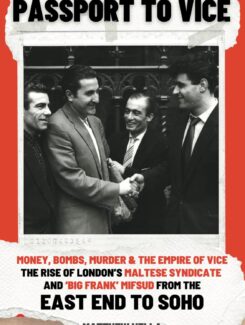 After World War II, a criminal class took control of the bowels of the ‘shocking’ city of London, cornering a square mile of vice for at least two-and-a-half decades.

Now their history is told in Matthew Vella’s detailed historical research, with newly-released documents from the Maltese and British national archives, the police statements of the Syndicate men, confidential police memos, and the most extensive search of British newspapers from the mid-1930s right up to the 1980s, with accounts from survivors of the era.

Be the first to review “Passport To Vice” Cancel reply