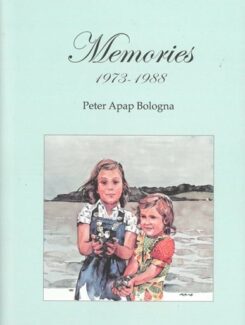 As a preamble to the first volume of these memories, I explained that my life has been a peripatetic one and also, some might say, like a roller-coaster ride. The years 1973 to 1988 were the most perpatetic of all. We first moved to London, fell in love with Ireland and bought a holiday home in County Cork. We moved to America in 1979, returned to London briefly, then moved back to America, and finally settled at our Irish home, keeping a foothold in London. In 1988 I returned to Malta, where I embarked on a new life.

Between 1979 and 1984 I travelled extensively in Latin America, and commuted frequently between London, New York, County Cork, and some trips to Malta. There was also a memorable trip to Japan. After 1984 I changed careers from banking to bookselling. As i have said earlier on I seem to have managed to do all the things I wished to do, and can now look back and recall all the hapy times, as well as the difficult ones.

The fifteen years of these travels and adventures coincided with the rule of the Labour Governments of Dom Mintoff. Mintoff, worshipped and reviled in almost equal quantities, entirely dominated political life. It was a difficult time for Malta. As I was away, though I kept in close touch, I could not describe events in Malta at first hand. So I asked various friends to allow me to interview them and was thus able to put together Part Two of these Memories, namely Aspects of Life and Politics in Malta. I am grateful to the following whose interviews form an integral part, indeed the most important part, of this book: Lilian Miceli-Farrugia, Lucinda Stellini, Roger Vella-Bonavita, Hadrian Attard Bezzina, Louis Fenech, and last but certainly not least Claude Gaffiero.