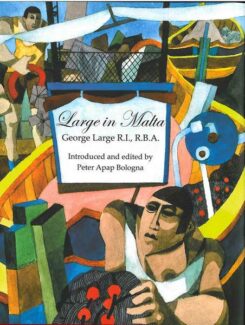 George and Pamela Large first came to Malta on their honeymoon in 1979. They loved it and returned often, eventually buying a house in Safi. George hardly ever stops painting and over the years his output of Malta paintings has been huge. Both he and Pamela have made an important impact on Maltese cultural history. Large in Malta tries to tell the whole story. George has had a most distinguished career in British Art, and is a member of the Royal Institute of Painters in Watercolours (RI), and the Royal Society of British Artists (RBA). His works are in prestigious private and public collections in Great Britain and Malta, and other countries. He has recently painted a series of twelve Malta scenes for a limited edition of 300 sets of prints in aid of the Salesians of  Don Bosco, and is also working for his next Malta exhibition.

Be the first to review “Large In Malta” Cancel reply