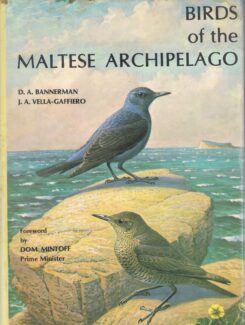 This work presents the first full description, supplemented by illustrations, of the hundreds of different species of birds recorded in the Maltese Islands. In the process, the important role of the archipelago in bird migration between Europe and Africa across the Central Mediterranean is amply documented and interpreted. Dr. David Bannerman, a doyen among world ornithologists, draws on is unparalled knowledge of the avian history of several countries – including nearby Tunisia and some of the larger Mediterranean islands – to describe each bird in detail, its geographical and breeding ranges, habits and habitat. His partner Joseph Vella-Gaffiero, a naturalist on the staff of Malta’s National Museum of Natural History and an expert on the birds of his country, contributes the local records and status of the species. The authors put at the reader’s disposal much new information based on their varied field experiences. Profusely illustrated in colour and line drawing, the work is also intended to serve as a general handbook on central Mediterranean ornithology, and should be of great interest and value to both scientists and laymen in the other countries of the region besides Malta and Gozo. The names of the species are given in the scientific, trinomial form and in the English, Maltese and Italian languages.