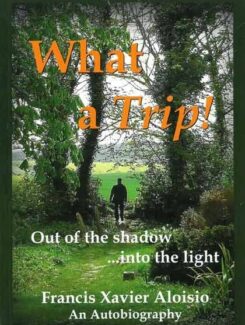 What a Trip – Out of the shadow …. into the light.

Francis Xavier was born in Malta, but spent more than twenty-nine years abroad. Brought up in a typical Maltese Catholic family, he became a priest and later a missionary in Peru. He eventually settled in England after resigning from the Church. On his return to Malta, an opportunity arose to attend a Tantric workshop on the sister island of Gozo, something outside of his normal curriculum now as an artist and spiritual facilitator to the temples of Malta.

With a thirst to discover his true emotional feelings, he listened to his inner voice saying, ‘Why not quench your curiosity by venturing into the unknown?’ The time was ripe for him to go beyond his fears and be true to himself, particularly in regard to his sexuality and self-expression, which had been suppressed for far too long! After the workshop, he began to put on paper the eye opening scope of many of his sexual expressions or lack of, from his childhood years up to today, and his journey to spiritual and creative adulthood.

The book is a ‘first’ in Malta, in so far as someone daring enough to write on such a personal subject and in such an open manner. Sexuality and spirituality have no national bounadaries, gender or denomination; they are a common reality to the entire human race. So Francis’ story is also our story and our own personal journey on the long road towards inner happiness, self-healing, spiritual fulfilment, as well as a loving adventure.

It is certainly worth ‘the Trip!’

Be the first to review “What a Trip.” Cancel reply