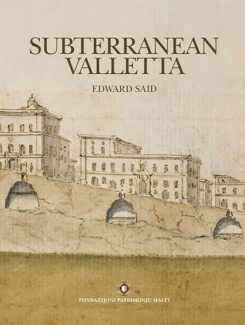 Many cities around the world boast their urban legends. Valletta is no exception. It is said that below its streets, fortifications and buildings lies an obscure network of passages, cut away into the rock and extended over centuries of history. Indeed some imagine it to be a veritable subterranean city in its own right. But with obscurity comes myth. Intrigued by the colourful tales so popular yet so unchallenged, Edward Said sets out to uncover what really exists beneath the surface of the capital and why it is there. Through scholarly research this book traces the growth of Valletta, describing its underground dimension starting from the ancient wells on Mount Sceberras, right until the recent discoveries made during the City Gate regeneration project. The narrative is richly illustrated with period imagery, drawings and maps as well as several photographs taken by the author during his investigations.

Besides being a historical and descriptive study, Subterranean Valletta ultimately aims at shedding light on a valuable hidden asset that makes this World Heritage City all the more unique.

Be the first to review “Subterranean Valletta” Cancel reply