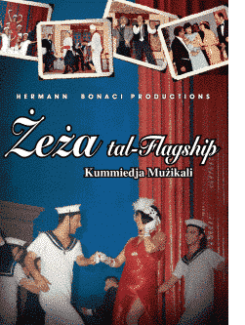 This local classic comedy, written by Mikielang Borg early in the last century, is based in a Strait Street bar after the First World War where the famous Zeza used to work. Outgoing, lively, cheeky and curvy by nature, Zeza was not only the British sailors’ favourite, but had also Maltese clients from all social classes. Trouble looms when aristocrats are caught in saucy adventures of the oldest profession. Zeza will be played by well-known actress Frida Cauchi.

Borg’s original script has been adapted into this new version by Joe Gatt with songs written on melodies from well known musicals. The production is staged in one of the leading theatres with live music.

Be the first to review “Zeza Tal-Flagship (DVD)” Cancel reply