Why Commedia? Why Malta? 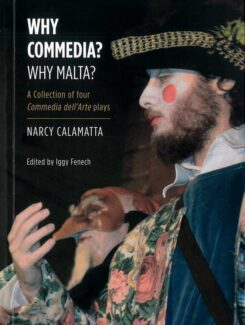 Why Commedia? Why Malta?

Why Commedia?  Why Malta? – a collection of four commedia dell’ arte plays.

‘When a Maltese person wants to insult an antagonist, one way of doing so would be to label him a ‘purċinell’. To many, this may seem like nothing more than a simple expression but, to me, it is obvious that it’s a corruption of the name of a Neapolitan clown in Commedia dell’Arte, Pulcinella.’

In his first book, Narcy Calamatta, one of Malta’s longest-serving actors and directors, takes readers on a journey through the history of Commedia dell’Arte in Malta – a theatre genre that was born in the village squares of medieval Italy. But he also goes a step further by sharing four original plays in the Commedia dell’Arte idiom, a rare occurrence in a genre in which the scripts are traditionally impromptu and based simply on a list of scenes embroidered on a piece of cloth.

To perpetuate his love for Commedia dell’Arte with audiences far and wide, the author has forfeited his claim to copyright on this book, allowing both professional and amateur theatre troupes, locally and abroad, to make use of them as they see fit.

Be the first to review “Why Commedia? Why Malta?” Cancel reply