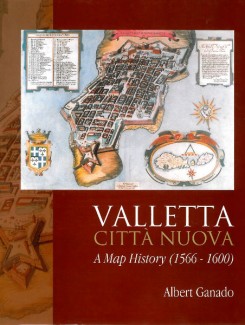 In 1980 the city-fortress of Valletta was officially acknowledged by UNESCO to be a World Heritage City. It was fashioned and constructed between 1566 and 1571, but its conceptual origin goes back to 1524, six years before the Order of St. John established itself on the island.

This book is a narrative of Valletta’s history based on corpus maps, described in detail, studied and analysed, and correlated with other documentary sources, both printed and manuscript. As David Woodward remarked in the Preface, Albert Ganado has married history and geography. Through this exercise, he has discarded or amended some old theories and he has thrown new light on various aspects of Valletta’s history, examined in a Mediterranean and European context.

The localities of the ninety-two maps described cover the holdings of libraries and museums in thirteen European countries, eight libraries in the United States of America, and private collections.

This book therefore, is a vital source for the history of map production in Europe. A new aspect, for instance, centres on the connection between Papal indulgences and the production of maps in Italy.

Be the first to review “Valletta Citta Nouva.” Cancel reply