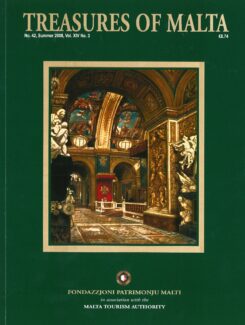 Emvin Cremona (1919-87) and the Rise of Modern Sensibilities in Maltese Sacred Art
Mark Sagona considers Cremona’s sacred oeuvre in the light of new material and discusses it within the changing ethos of Church Art in Malta in the 20th century.  The article was inspired by the recent rediscovery of Cremona’s modellos for the mosaic cycles at Ta’ Pinu, a collection now being restored by Godwin Cutajar, sponsored by Bank of Valletta

Borg in-Nadur, A Bronze Age Fortress
In the third in the series of pull-out designs with Commentaries, Dr Stephen C Spiteri discusses fortified settlements in the Maltese Bronze Age, with special reference to Borg in-Nadur

The French Revolutionary Army in Malta: Some rare relics from the Army of Egypt
Two hundred and eighteen years ago, on June 9, 1798 Malta was taken by storm by the French Revolutionary Army.  The island which had defied the Ottoman Empire fell helplessly to the French invaders in a set piece lightening military operation.  Robert Attard examines a number of unfamiliar objects related to this episode in Malta’s history

Interpreting St Lawrence
Joanna Lace discusses a suggestion that a painting at the Wignacourt Museum, Rabat, Malta, portraying St Lawrence could be the work of the German painter Adam Elsheimer

Johann Michael von Burch: A multitalented author in Malta and Gozo Part II
In this second part of his study of the Count de Borch, author of an important work, Letters sur la Sicile et sur l’Ile de Malthe (1782), Thomas Freller gives an account of the important role played by Borch in the closing events of the ‘Ostrog Affair’.