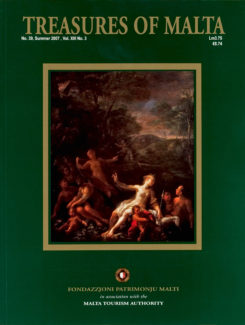 Tiepolo’s ‘Council of the Order of Malta’, what’s behind it?
Giovanni Bonello’s exploration of the dispute between an Italian nobleman from Udine and the Order of St John, a dispute that led to the commissioning of a famous painting by Tiepolo, reveals the Order at its most arrogant and snobbish

When Caravaggio’s masterpieces became pawns on the political chessboard
During Caravaggio 400 Joseph Pirotta reminds us of the tussle between the Labour Prime Minister Dom Mintoff and Archbishop Michael Gonzi about the ownership of property formerly owned by the Order of St John.

The Portuguese Socio-Artistic imprint on 18th century Malta: The Baroque triumphalism of Don Antonio Manoel de Vilhena and Don Emanuel Pinto de Fonseca
In his study of the arts in Malta under the Grand Masters Manoel de Vilhena and Pinto de Fonseca, Mario Buhagiar examines the relations between art and the assertion of power during the 18th century.

From “A Series of Views of Malta”

Maltese Chapbook Literature of the 19th and 20th Centuries – From murder and jokes to courtship and war
This is the second part of a pioneer study by William Zammit of the chapbooks, also known as street literature, published in Malta during the last two centuries

Carlo Pisi (1897-1979): An Italian Sculptor in Modern Malta
Mark Sagona brings to light the art of Carlo Pisi in Malta

Spectators and Gossipmongers – the Manoel Theatre through the foreigners’ eyes
Thomas Freller adds to our knowledge of Vilhena’s Theatre, through his examination of what 18th and 19th century foreign visitors have said about it.

The Domvs Romana – Bridging the gap between ancient and modern societies
Suzannah Depasquale gives a history of the 20th century excavations of the Domus Romana (formerly known as the Roman Villa) at Rabat, and its recent thorough refurbishment