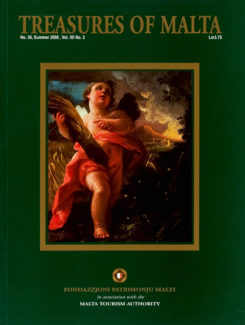 The Early Christian Site at Abbatija Tad-Dejr, Rabat, Malta – Archaeological and Art Historical Insights
In this essay, Mario Buhagiar, a leading expert on Early Christian and Medieval art in Malta, provides an up-to-date scholarly picture of an important site

Mattew alias Josep Callus – Patriot or Opportunist?
Stanley Fiorini investigates the tragic and mysterious figure of an interesting Maltese from the 16th century

The Maltese Eight-Pointed Cross and its Usurpation in Novara – A 1651 Incident
Giovanni Bonello reveals a curious episode in the history of the eight-pointed cross, symbol of the Order of St John, known popularly as the Maltese cross

A New State of a rare pre-Siege Malta Map

‘Delightful, Clean and Spacious’ – Maltese Inns, Hostels and Hotels in days of old
In this second part of his essay on accommodation in Malta for travellers between the 16th and 19th centuries, Thomas Freller writes on the first half of the 19th century

Pietro Paolo Troisi 1686 – His Biography and Artistry as a Silversmith
Pietro Paolo Troisi was a notable artist of the 18th century, distinguishing himself as an architect, scenographer, designer, silversmith, sculptor and medallist.  Joseph A Briffa here gives us Troisi’s biography and discusses one of his artistic activities.