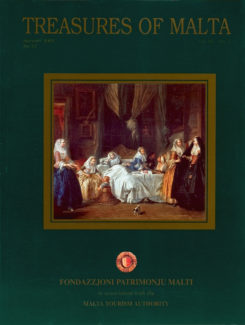 Early 19th Century Hymns for Maltese Protestants
Anna Borg Cardona discovers a rare book of hymns in the British Library with 6 hymns printed in Maltese in the orthography of M A Vassalli, which may be the earliest Maltese example of lithography in the printing of music‍

The First Guild of Artists in Malta, 1671
Giovanni Bonello writes about the formation of the first association of artists in Malta and how it came about‍

The Rosary as Art: An Historical Glimpse
Nicholas de Piro discusses the history and evolution of the simple rosary, listing examples from many parts of the Christian world, including Malta‍

Paintings Auctioned in Paris and London

Christmas 2005 Issue of Treasures of Malta