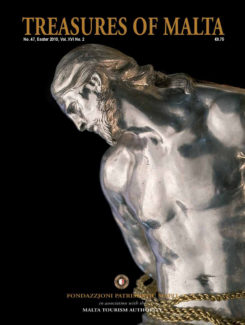 La Sfessania ‘Quel ballo a la Maltese’
Anna Borg Cardona has discovered the existence in the 16th century of a dance said to be of Maltese origin, a dance illustrated in etchings of the great French artist Jacques Callot, and she writes of the possible relationship to other dances popular at the time‍

The Restoration of St Cathaldus Chapel, Rabat
Conrad Thake gives s short history of the ancient chapel and describes the recent restoration of its exterior

In search of ancient ramparts of Rabat, Gozo
A pioneer study by Godwin Vella of the history of Rabat’s (Gozo) ancient fortifications and the still existing traces of them‍

A Saint’s promise retrieved and restored
The second in a series of essays on fine arts conservation by Pierre Bugeja of PrevArti.

Fra Carlo Valdina and his house in Valletta
Giovanni Bonello writes about a little known and badly-behaved knight of the Order of the 16th-17th centuries who could have been Grand Master, and who built a five storey house in Valletta which is now being restored‍

The Care of Photographic Material

Letters to the Editor