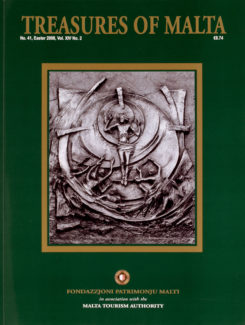 The works of Giuseppe Briffa in the churches of Gozo‍

Malta through the eyes of F M Hessemer
Friedrich Maximilian Hessemer (1800-60) is a name hitehrto unknown to the historian of 19th century visitors to Malta.  Albert Friggieri gives an informative account of Hesserman’s visit to Malta in 1829

Maltese ‘Siege’ Batteries of the Blockade – 1798-1800
The second in the series of pull-out designs with Commentaries, Dr Stephen C Spiteri describes aspects of military engineering during the siege of the French garrison by the Maltese insurgents and their allies in 1798-1800

The Underground Slave Prisons at Vittoriosa
Lorenzo A Zahra, in Treasures of Malta, No. 30, Summer 2004, ‘Letters to the Editor’, wrote about the Galley Slave Prisons of Vittoriosa, underlying the Post of England, both of which were ignominiously demolished in 1903.  He sheds more light on this historic monument, while providing us with some more photographs, some of them hitherto unpublished

Caring for Antique Furniture at home