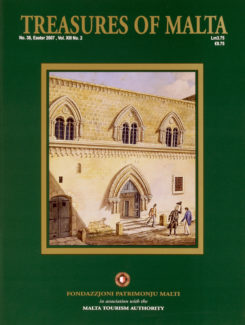 The Cavalier d’Arpino and the Statutes of Grand Master Verdalle
In this article, Giovanni Bonello establishes that the drawings on which the many plates in the fine editions of the Order of Malta’s statutes issued by the Grand Master Verdalle in the 1580s were based, were the work of Giuseppe Cesari, better known as Il Cavalier D’Arpino

From “A Series of Views of Malta”

Maltese Chapbook Literature of the 19th and 20th Centuries: Origins and Themes
This is the first part of a pioneer study by William Zammit of the chapbooks, also known as street literature, published in Malta during the last two centuries

Letters to the Editor