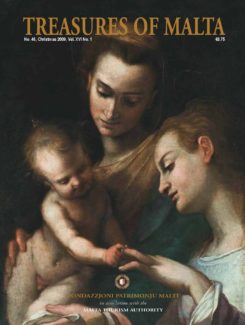 The Christmas 2009 issue of Treasures of Malta is notable for its new style cover, with the illustration (Filippo Paladini’s Mystical Marriage of St Catherine) covering the entire surface of the front, for its new heavy and creamy paper, and for a new series of take-out prints of images from the Albert Ganado Collection.  The articles cover a whole range of topics – from Krystle Farrugia’s study of the Carmelite Church, Mdina, and Jessica Borg’s piece on Alessio Erardi, to Giovanni Bonello’s stylish piece on the first motor car in Gozo, and Lorenzo Zahra’s short history of electricity generation in Malta up to 1964.  Particularly important is the article by J.C. Sammut and E. Azzopardi on a gold coin minted in Malta in the Year of the Hagira 472 (AD 1079), the first coin of the Arab period known so far to have been struck in Malta, but most readers will also be drawn to Carmen de Pasquale’s article on the cippus given to the French king by Garndmaster de Rohan, and now in the Louvre (whilst its twin is in Malta), a monument that enable the French scholar Barthélemy to decipher the Punic language for the first time, and to Wlliam Zammit’s well-illustrated article on an 18th century macchina de’ fuochi made in Malta to help celebrate a pope’s accession.

A unique medieval Fatimid gold coin of Malta
J.C. Sammut and E. Azzopardi comment on the important recent discovery of the first coin known to have been minted in Malta by its Arab rulers

The Malta Cippus in the Louvre
Carmen de Pasquale writes a detailed account of the passage of the famous Cippi so important for deciphering of the Phoenician alphabet, from their discovery to the final resting place of one of them in the Louvre Museum, Paris

Donation to the National Collection

A rare ‘Columbian Press’ in Malta

The first motor car in Gozo
Bought by Marietta, Carolina and Carmella Spiteri in Victoria, Gozo, before 1910 and still in existence in the United Kingdom, a 1904 Siddley 6hp car is the main subject of Giovanni Bonello’s lively account

A splendid Baroque Macchina de’ Fuochi for Pope Clement XIV
A specialist on the role of public art in the formation and strengthening of power, William Zammit writes about an 18th century machine used in Malta for the fireworks displays, and about the artistic contraptions of the period used for public events

Electricity-Generation in Malta, 1896-1964
The recent turbulence in the oil market has focused attention on Malta’s main source of energy, electricity, Lorenzo A. Zahra, who served as a senior stores officer with the Malta Power station 1955-84 recounts the history of electricity-generation in Malta from the beginning up to Malta’s Independence in 1964, based mainly on contemporary press reports