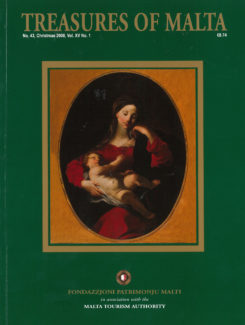 A sad loss for Malta: The death of Governor, Sir Walter Congreve, V.C.,K.C.B.,M.V.O.
Chris Grech reminds us of a brave general who was briefly British Governor of Malta in the 1920s and was buried at sea off Malta when he died in 1927

Mdina’s Greek Gate
In this, the fourth in the series of pull-out drawings with commentaries, Dr Stephen C Spiteri discusses the only medieval entrance to have survived in the island down to our time

Stefano Erardi: A 17th century artist and his material
Through a historical study combined with scientific investigations of a sample of his paintings, Charlotte Bellizzi suggests a list of materials used by the artist

The Villages of Malta
In this first part of a two-part article, Brian W Blouet traces the growth of Malta’s villages since medieval times, and the disappearance of others providing maps of their distribution

The Church of St Anthony the Abbot
Birgu became an incomparable centre of Marian devotion following the arrival of the Order of St John in 1530.  Sacred icons of Our Lady of Philermos were venerated at St Lawrence Conventual Church, and that of Our Lady of Damascus at the Greek Parish Church.  Lorenzo A Zahra traces the history of the church of St Anthony the Abbott where two more icons were veneratted

The world of whistles
Anna Borg Cardona is guest curating a forthcoming exhibition of whistles at Palazzo Falson Historic House Museum, Mdina.  The exhibition will be held during the Carnival and Easter season 2009