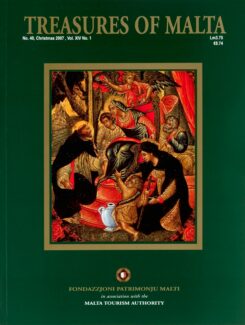 Schellinx’ Castrum Maris
In this, the first pull-out designs of Maltese fortifications, Dr Stephen C Spiteri, the leading authority in the field, suggests what Fort St Angelo, formerly known as the Castrum Maris, looked like before the various changes made to it by the Order of St John

A Casa del Fascio for Malta
Conrad Thake looks at a project, never carried out, to build a ‘Casa del Fascio’ outside the gates of Valletta, putting it in its historical and architectural context

The Supper at Emmaus in the style of Bernardo Strozzi (1581-1644)
Sandro Debono discusses an enigmatic painting from the national collection that has been temporarily on exhibit at the National Museum of Fine Arts, Valletta

From ‘A Series of Views of Malta’

Musings on Maltese Nationality: A treasure of the edge but not peripheral
Nicholas de Piro gives a witty and very individual viewpoint of who the people of these islands are

Furniture in Palazzo Falson: An appreciation of some selected pieces
Joe Galea-Naudi and Denise Micallef discuss the more interesting items of furniture on display at Palazzo Falson, Mdina

Rare Maltese Coins
Comm Joseph Sammut M.O.M.,K.M. commemorates the end of Malta’s millennial history as an issuer of its own coinage by listing some very rare coins issued in Malta by the Order of St John

An eighteenth century ‘Baroque natural trumpet’ in the Palace Armoury Collection
The Armoury housed in the Presidential Palace, Valletta, includes in its collections a rare 18th century ‘natural’ trumpet on which Michael Stroud and Antonio Espinosa Rodriguez give historical comment