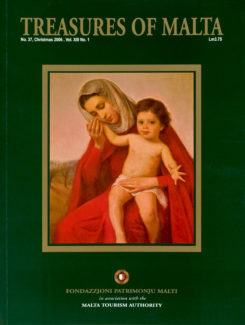 Antoine Favray in Constantinople – Revisited
Stephen Degiorgio discusses a number of paintings at the Pera Museum, Istanbul by or attributed to Antoine Favray‍

The Ceiling of the Church of the Virgin of Victory, Valletta
Mario Buhagiar highlights the art historical significance of Malta’s most important Baroque ceiling after the Co-Cathedral of St John and discusses the on-going restoration intervention‍

‘Into my Imagination’
George Glanville‍

Helene Buhagiar (1888-1975)
Lisa Baldacchino has produced the first long study of Helene Buhagiar, artist and contributor to the arts‍

Malta’s First Cultural Journal
Alfred Zahra de Domenico is publishing the first study in depth of a Maltese 19th century journal in the field of culture, the arts, and literature‍

Maltese Crafts and Trades: A mural by Frank Portelli at the National Museum of Fine Arts
Dennis Vella comments on a notable recent acquisition by Heritage Malta‍

Towers and Castles of Malta