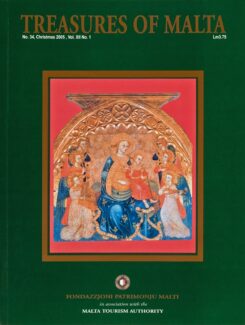 Some aspects of Maltese Christmas Traditions
Guido Lanfranco examines some of the lesser known facts about Christmas traditions in Malta and how they have changed over the years.‍

English Language Books in Malta during the Knights’ time
William Zammit explains how from the mid-17th century onwards, the presence of books in the English Language increased primarily to encourage English converts to embrace Catholicism.‍

Edward Lear (1812-1888)
Catherine Sinclair Galea discusses Edward Lear’s many visits to Malta over a span of twenty years and traces his experiences and artistic development during this period.‍

Villa Parisio – A House with a History
John Manduca traces the fascinating history of Villa Parisio, in Lija, residence of the Parisio family and later of the Stricklands, and now seat of The Strickland Foundation.‍

Alfred Chircop – Master of the Abstract
Emmanuel Fiorentino takes an overall look at the career and some of the works of one of Malta’s most eminent contemporary artists.‍

The Bologna Letters
Noel Caruana Dingli writes on the extent of French influence gleaned from archived letters addressed to members of the Bologna family in the mid-18th century.‍

A Country Palace on Corradino Hill and a Cavern in St George’s Bay, St Julians
Theresa Vella discusses whether a stately Palace, indicated on the site of Corradino Hill in a late 18th century watercolour, ever existed. Also detailed is a 1695 ink drawing documenting the still existent underground fresh water cavern at St George’s Bay.‍

Department of Information Exhibition of pictures and films from its archives