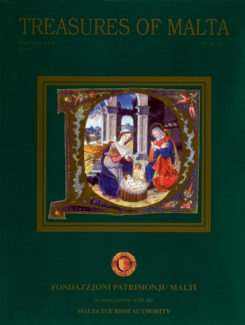 Bronze from China: Exhibition in Valletta

The Gozo Citadel during the Great Siege

Mememto Mori and Vanitas Elements in the Funerary Art at St John’s
Dane Munro is specialising in Neo-Latin and Baroque culture and has dedicated studies on St John’s and its treasures.‍

Works by Willie Apap at the Museum of Fine Arts

Royal Visits to Malta, 1911-1952
Maurice Micallef Eynauid documents the numerous visits by assorted Royalty during the first half of the 20th century‍

Silver Coins from the Central Bank

Works of Art in Philately