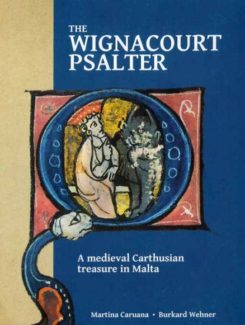 The Wignacourt Psalter – a medieval treasure in Malta.

This richly illustrated analysis takes a multidisciplinary approach to the understanding of the Wignacourt Psalter, a late thirteenth-century illuminated liturgical book written on parchment. It was discovered in 2014, and acquired and promptly restored by the Wignacourt Collegiate Museum in Rabat, Malta. Apart from being the oldest treasure in the museum’s collection it is also the earliest known psalter on the island.
The manuscript is of obscure provenance and it suffered several physical losses over time. Nevertheless, this research ascertains that its early history was tied to the diocese of Thérouanne in north-eastern France and that, during the fifteenth century, a number of different additions, including antiphons and their melodies, adapted the Wignacourt Psalter for liturgical use in a Carthusian monastery. This monograph is complemented by an inventory of these antiphons, together with a detailed account of its conservation-restoration.
By: Martin Caruana & Burkrard Wehner
Format: Hardback
No of pages: 162

Be the first to review “The Wignacourt Psalter” Cancel reply