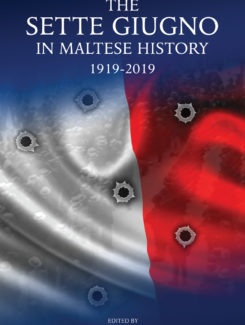 THIS IS A MODEST COMMEMORATION of the Sette Giugno 1919 a century after it happened. It is a small but timely addition to the pre-war and post-war books about the event that have already been published. It also includes, as annexes, for the first time, the revealing report of the commission of enquiry, and the equally revealing minutes of the committee looking into compensation for families of the dead and wounded.

I have asked contributors to try and look at the Sette Giugno from different angles: the historical, political, international, juridical and economic, including its role in the collective memory and as a measure of national identity. As much of what has appeared about the Sette Giugno has been in Italian or Maltese, and for other reasons, it was decided to use English.

The main publications so far – by Orlando, Scicluna Sorge, Frendo, Bartolo, Azzopardi and Sant – are mentioned in footnotes. Other references exist in some general Maltese history texts. In addition to all the contributors, I also wish heartily to thank the publishers, Midsea Books, and my assistant Daniel Borg M.A. (Melit) from the Institute of Maltese Studies. The cover of this book is inspired from the front page of the magazine Il-Poplu in connection with my 1989 oration in Pjazza San Nikola, Siġġiewi: ‘is-Sette Giugno Sebgħin Sena Wara’ which was then designed by Joe Scerri