The Sedan Chair In Malta – Is-Suggetta 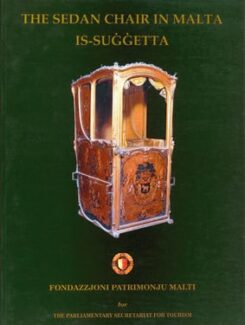 The Sedan Chair In Malta – Is-Suggetta

The Sedan Chair in Malta – Is-Suggetta.

The Sedan Chair, or as commonly known by the Maltese is-suġġetta, is the perfect example of the means of transport for the class-oriented (both secular and ecclesiastical) as early as the 16th century.
Nicholas de Piro’s book was published in parallel with the exhibition on The Sedan Chair in Malta and is the only existing comprehensive guide to this intriguing objet d’art. A general history to its use, ownership and constructional adaptations are highlighted, such as the Tarxien suġġetta with its little extra room at the base for stretching the legs of the gout afflicted owners.
The book also elaborates on the sophisticated artistic aspect of these objects, since most of them are delicately carved and painted with various motifs of an ecclesiastical and allegorical nature.
Nicholas de Piro, a founder member of Fondazzjoni Patrimonju Malti, was curator of a Grade 1 historic house in Gloucestershire and now together with his wife and four children, has restored and opened Casa Rocca Piccola, a patrician Maltese house and Costume Museum. His other publications include Valletta, Mdina, The Temple of the Knights of Malta and Influence & Patronage.