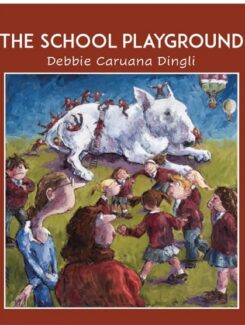 Debbie Caruana Dingli has been a recognised presence on the local art scene for the past thirty-five years and her accomplishments in both portraiture and cartoon painting have played a significant role in establishing her reputation. Debbie’s artistic compass is clearly oriented towards humans and her interest in observing people from all walks of life constantly provides her with a rich and varied source of inspiration.

Artist’s sketches are generally private and are rarely meant to be viewed alongside the finished works. The intention in this publication is to provide the reader with an insight into some of the stages involved in presenting a finished cartoon painting to the public. By placing Debbie’s sketches alongside their corresponding paintings, the reader is able to follow a thread from the conceptual stage through to the finished works. These comparisons facilitate a fuller understanding of the artist’s train of thought whenever she embarks upon a cartoon painting and shed light on the interests she has long pursued. The sketches in this publication are a unique archive of Debbie Caruana Dingli’s personal vision which is continually being transformed into art.

Be the first to review “The School Playground” Cancel reply