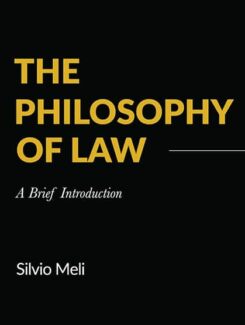 The Philosophy of Law, A Brief Introduction is a voyage of discovery. It invites the reader to embark on an inquisitive journey where one may disembark at pleasure at different ports of call to explore the attractions offered. One here briefly encounters the major schools of philosophy of law, the notions of law, morality, justice, the rule of law, and the juridical personality as well as the history and development of feminist jurisprudence. Throughout, the reader is gently escorted by the greatest thinkers of humanity, is coaxed to objectively examine the origin, evolution and effect of such concepts in as palatable a manner as possible and is assisted in constructing an inner dialogue that may stimulate further reflection and discernment.

In De Oratore, Cicero emphasized that the educator’s primary task is three-fold: to teach (docere), to delight (delectare) and finally to stimulate into action (movere or flectere). Modestly, these goals are here pursued and optimistically aspired for.

“The fact that the philosophy of law is considered as a field of ‘practical philosophy’ within the discipline of philosophy and a field of ‘theory’ in the discipline of law does of course indicate methodological differences, but it also shows that the interface between the two represents the most fertile ground for meaningful conversations about the law. In choosing to address specifically law students and legal practitioners, Judge Emeritus Silvio Meli is making a bold statement against preconceptions – or even prejudices – that are dismissive of this area of study that brings law and philosophy together. Legal education does not simply include the philosophy of law alongside other subjects, but it also stands to benefit from a deeper appreciation of the subject of this book.”

“Judge Emeritus Silvio Meli draws us away from perfectionism as much as from chaos. The guide he
provides us with, takes into consideration the fallibility of our nature to succumb to disorder, even if, perhaps, we are originally born to it. Nevertheless, we cannot live by disorder. We need some kind of order. Law provides one way of doing this. This book surely channels the newcomers into the right direction, and funnels the eye of the already practised to remain focused.”

Be the first to review “The Philosophy Of Law - A Brief Introduction, Judge Emeritus Silvio Meli” Cancel reply