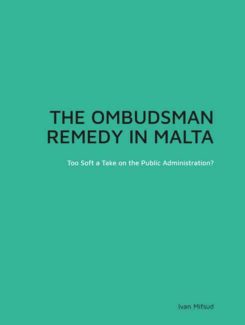 Too soft a take on the public administration?

The Ombudsman Remedy in Malta: Too Soft a Take on the Public Administration? was inspired by the Parliamentary Ombudsman’s lament (2017 Annual Report) that he is encountering resistance on the Public Administration’s part, which resistance is affecting the effectiveness of his operations. The author seeks to explain why the ombudsman institution exists, its strengths and weaknesses, how it operates, its benefits not only to the general public but also to those involved in public administration; the underlying rationale being that one cannot support an institution without true appreciation and understanding of the same.

It is hoped that this publication will enhance such understanding, leading to better cooperation between the stakeholders.

Suggestions for improving the system are also offered.

Dr Ivan Mifsud is the current Dean, Faculty of Laws, University of Malta. He spent thirteen years working for the Parliamentary Ombudsman, before embarking on his academic career.