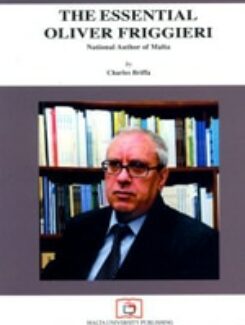 Oliver Friggieri is Professor of Maltese Literature at the University of Malta and he is the foremost Maltese Literary critic and a national author. He has published extensively and in his creative writing he attempts to interpret the sentiments and attitudes of a people living in the Central Mediterranean.

The Essential Oliver Friggieri includes some translated works and implies that the selection is representative of Friggieri’s feelings, thoughts, and mind style in the source culture. It projects a compact, coherent image of him as a relevant contemporary national author: that is, as it embodies an image of some of the works most characteristic of him, the selection, with no particular arrangement in mind, tends to stabilize the sense among non-Maltese receptor readers of what constitutes the relevant literary output of Friggieri in a modern environment.

Through the medium of literature Friggieri assumes the role of the conscience of a nation. He proclaims its traditional positive elements in his longer poetic works, but exposes negative qualities in his fiction. His prose is not a weapon for war but a cry for justice and honesty. It is simple enough to retain the common readers’ attention and intriguing enough to involve their thinking.

Be the first to review “The Essential Oliver Friggieri” Cancel reply