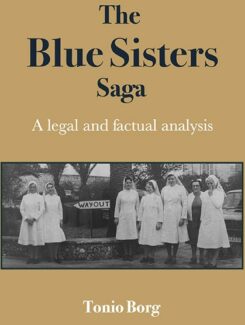 This new title by Tonio Borg deals with a saga which occurred more than forty years ago. The foreign Sisters of the Little Company of Mary, popularly known as the Blue Sisters, were expelled from Malta by a Maltese Government in 1980. The Hospital as a consequence closed down after more than 80 years in operation. The book deals with both legal and factual issues. The legal issues which arose out of the saga relate to the law on judicial review of administrative action, the influence of English common law on Maltese jurisprudence as to the reasonableness test regarding government action, the rules relating to contempt of court, and the right to fair hearing in such cases. The book also deals with the action instituted by Government to evict the Blue Sisters from the Hospital claiming that their right of enjoyment over the Hospital being a usufruct had expired in 1941, and the valiant decision of the Court of Appeal in 1981 rejecting such action. The issues of fact relate to the unique constitutional case signed by almost all practising lawyers challenging the right claimed by judges to decide themselves cases of contempt in their regard, the obnoxious Legal Notice which retroactively imposed a tariff of Lm1,000 (€2,329) per lawyer in excess of three who signed a judicial act, the suspension of duties of the judiciary by Executive diktat, and the enactment of Act No. VIII of 1981 severely limiting judicial review as a knee-jerk reaction to the Blue Sisters case.

These legal and factual issues are examined in detail in this book, shedding light on a shameful episode in Malta’s history.