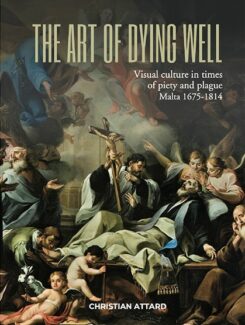 The images and the accompanying rituals of death had, through time immemorial, helped to dilute the sorrowful finality of loss; they were a means through which death, grievance and mourning were sanitised, aestheticized, at times, turned into sheer spectacle. This book examines and contextualizes the intricate, sometimes colourful, visual culture that evolved around the subject of death in the Catholic world, focusing especially on Malta during a period bookended by two devastating plague bouts, namely, the plague of 1675-6 and that of 1813-4.

This artistic legacy was the direct result of a host of religious beliefs, doctrines, rituals, and mores, and, more often than not, it developed independently of plague spells or other calamitous events. One cannot, however, rule out the possibility that large scale catastrophes could have impacted upon this visual legacy. An intricate iconography—upon which this study elaborates—was developed around plague. It is consequently an ongoing discourse of the present book to determine the extent of influence wielded by calamities (with a particular reference to the two plague-bouts in question) on the development of the visual culture of death in Malta.

A secondary theme herewith tackled is the charting of possible changes in people’s ways of thinking about death. Such changes, if present at all, might have been very subtle, almost imperceptible, and possibly stratified; meaning that new ideas would have perfectly co-existed with older ones. These possible changes are inferred through, amongst others: a careful analyses of plague or death related imagery; a sample study of last wills and testaments; research in contemporary literature and diaries.

This book explores and meditates upon the ways art had offered hope and possible redemption in the face of death and disease. It delves into those ways art had transformed a severance or a terrible disease into a codified and a wholesome, if not a desirable, event; the ways in which art had offered tangible, believable answers to the unfathomable mysteries of humanity’s existence: disease, death, and afterlife.