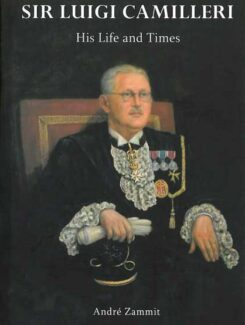 This biography of Sir Luigi Camilleri, a distinguished son of Gozo, who lived to nearly a hundred years, covers not only his personal career but also the eventful years through which he lived. Sir Luigi was a child prodigy who matriculated at thirteen years and graduated at twenty. At twenty-eight he was one of the pioneer members of the Malta Legislative Assembly under the 1921 Self-Government Constitution, being returned on the first count as one of the four members of the Partito Democratico Nazionalista for Gozo, where he had established a very successful legal practice.

He was appointed Magistrate and later Judge, for twenty-two years, which included the turmoil of World War II and the equally turbulent pre-war and post-war years. He was a central figure in the Ultra Vires and the Internees cases and in the Conspiracy Trials. He was Chief Justice for the last five years of his career during which time he was knighted. Thirty-four years as a member of the Judiciary is probably a local record.

This highly readable biography is mainly based on Sir Luigi’s personal papers and memorabilia, but is not just a family scrapbook. Written in a lively style and profusely illustrated, it contains a number of previously unrecorded anecdotes but it also includes a hundred footnotes, an Appendix and an Index of Names for those engaged in research. Of great interest is an impressive ‘legal’ family tree comprising fifty-five of Sir Luigi’s relatives in the legal profession. As Mark Twain says: ‘Success is relative; the more success the more relatives’.

Be the first to review “Sir Luigi Camilleri” Cancel reply