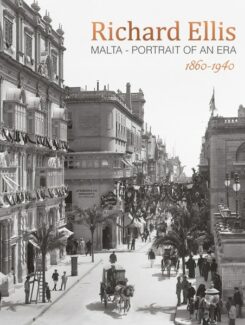 Richard Ellis is synonymous with photography in Malta during the Victorian and Edwardian periods and beyond. He left his legacy, this invaluable archive of images, for the benefit of the generations that were to follow. This unique photographic collection was added to by his son John and his grandson Richard, both photographers in their own right. The whole compilation creates a pictorial history of the Maltese Islands that would prove difficult to surpass. The contents cover a wide variety of topics ranging from formal portraits of visiting Royalty to everyday mundane tasks such as the milking of goats, and everything in between.

The pictorial collection in this publication, on the fiftieth anniversary of Malta’s independence, attempts to portray the events and changes that took place in Malta’s way of life from an agricultural society to one with a modern and industrialized outlook. The very same building blocks that eventually, so many years later, formed the foundations on which the Nation that is Malta could proudly take its place in the World.