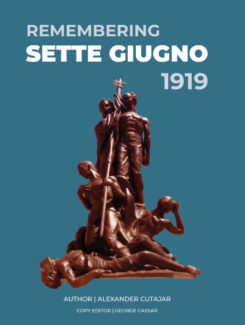 The incidents reported in this book, known collectively as the Sette Giugno Riots, took place in 1919 while Malta was a colony of the British Empire. The weekend of Saturday 7 and Sunday 8 June and the three days that followed were days marked by turmoil and stained with bloodshed. One hundred years on, this publication marks a centenary from when the Maltese rose against their British occupiers. This is an occasion to look back at the hardships and the political aspirations of the Maltese at the turn of the 20th century. The aim of this book is to help us remember and reflect on an event of national importance so that we develop an awareness and appreciation towards a particular event in Malta’s historical past which, though itself only lasting a few days, yet its happening influenced to a considerable extent the course of Malta’s remaining colonial history.

Be the first to review “Remembering Sette Giugno 1919” Cancel reply