Religion And The 1921 Malta Constitution 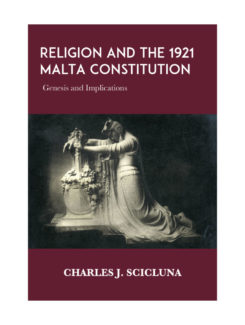 Religion And The 1921 Malta Constitution

Religion And The 1921 Malta Constitution – Genesis And Implications

Religion and the 1921 Malta Constitution, Genesis and Implications by His Grace Mgr Charles J. Scicluna focuses on the first two decades of the twentieth century and in particular on the discussions that culminated in Act I of 1922, or the Religion of Malta Act.

The history of The Religion of Malta Declaration was marked by the healthy interaction between the need to guarantee religious freedom to everyone, as witnessed by the 1802 Declaration of Rights and the 1906 Additional Instructions, and the strong wish of the Maltese to grant “special civil recognition” to the Catholic Religion in the constitutional order of society.

Maltese society has quickly developed into a multi-ethnic society where different religions co-exit. The Catholic Religion still provides the nation with its historical heritage and narrative, with its ethos and ritual. The balance needs to be struck between the need to be inclusive of other religious experiences in order to promote social cohesion and the need to safeguard the unique religious narrative that has given Malta and the Maltese their unique culture.