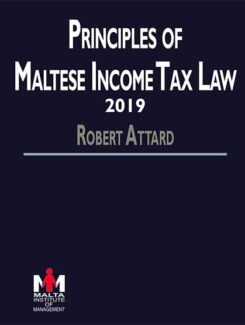 Principles of Maltese Income Tax Law provides an up-to-date discussion of Maltese Income tax legislation along with the leading decisions of the Courts including substantial extracts from major judgements. Practitioners and students reading Law, Accountancy, ACCA, ADIT and the MIT diploma can turn to Principles of Income Tax Law for an understandable discussion of two of the most dynamic and controversial chapters in the Laws of Malta. Areas of focus include international taxation, tax policy and tax controversy.

Philip Sciberras, a former Judge of the Court of Appeal describes Principles of Maltese Income Tax Law as ‘a must-read for all who are either interested or involved in this highly specialised area of law’ describing the author as ‘an expert in his field, … without doubt one of Malta’s finest scholars on tax law’.

Giovanni Bonello, a former Judge of the European Court of Human Rights says that the book is ‘not just an arid explanation of the intricate and sometimes opaque provisions of taxation law, but an attempt – and a very successful one – to place fiscal law in the context of superior principles of governance … Attard’s systematic vademecum has the makings of a textbook destined to become a classic, crucial for tax consultants, practitioners and, not least, for the victims of aggressive fiscal policies’.

Philip Baker remarks that ‘Single-handedly, Robert is generating the literature which explains the structure and nuances of the system in Malta. One wishes other countries had similar authors who could write similarly enticing books to explain their tax codes.”