Of Maltese Generals and Admirals. 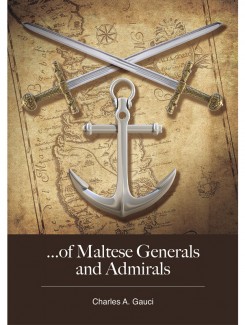 Of Maltese Generals and Admirals.

… Of Maltese Generals and Admirals.

Charles A. Gauci writes about men of Maltese lineage who have, over the years, achieved the actual or effective rank of General or Admiral in the armed forces of both foreign powers and of Malta itself. Although the Maltese islands are tiny, the Maltese have always punched far above their weight and this book aims to show the force of that punch.

The book starts by looking at Generals in the armies of Wallachia, Hungary, Poland and Bavaria and follows this by an account of the two Maltese Generals who led the 1798 insurrection against the French. He then deals with Maltese generals in the army of the British Empire and of the United Kingdom and looks in some detail at the honorary rank of Brigadier General conferred upon the Bishops of Malta by the British government.

The section dedicated to Admirals includes tales of Admirals in the navies of Argentina, the Napoleonic kingdom of Naples as well as in the Royal Navy. Since Brigadiers are, in effect, one-star Generals, the author includes an appendix covering all Maltese who have reached this rank in the British Army, the Malta Land Force and in the Armed Forces of Malta. The book is full of interesting anecdotes and stories. It is a mine of vital information about a number of military personalities.

Be the first to review “Of Maltese Generals and Admirals.” Cancel reply