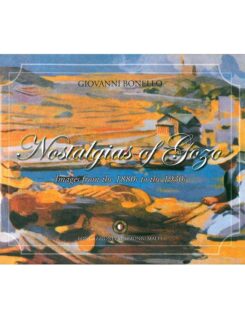 Giovanni Bonello, popularly knows as Vanni, has regaled us with another delicacy in his repast of publications, but with a difference… he has invited his readers to participate in the enjoyment of the excellent oeuvre of one of the best photographers our island has hosted: Geo Fürst, who practically has no equal. Bonello confessed that Fürst work was so extensive that he had to leave unpublished four photos out of five. Let us hope that he will make amends by publishing he rest! Albert Ganado, Melita.

Bonello outlines the seemingly improbable relationship of this German photographer with British dominated Malta, to which he came as a diplomatic secretary… Fürst’s love for this island is rendered most tangibly in his photographic legacy. Looking at these images, one soon feel a kind of affinity with the man who made them, because both photographer and sentimntally moved by them. … For Fürst, they probably also exorcised the fear that he would one day made to leave. … The photographs testify to a deeply intimate involvement between subject and photographer. Joe Azzopardi, Vigilo.

Nostalgias of Malta is the name of a most beautiful book published yesterday by Fondazzjoni Patrimonju Malti. This is the work of Judge Giovanni Bonello who for several months worked on this volume which, through the medium of pictures, recounts the history of one of the eras of our country. Joe Mikallef, In-Nazzjon Taghna.

This book therefore is important because it reinstates Fürst in our collective memory. Apart from that it is a signal addition to the works issued in recent years that capture the image of malta that has been transmogrified, a Malta that existed before the air force of the country Fürst loved as much as Malta had destroyed a good portion of it and before greed masked as development had changed it even more drastically that German an Italian bombers had donne… This fine selection of Fürst pictures… Above all, we are grateful to Giovanni Bonello for his usual graet care in the compilation of the volume and for his stimulating biographical-critical introduction to it. Paul Xuereb presenting the book.

As soon as I scanned through Nostalgias of Malta, a handsome collection of images of the Maltese Islands taken between the first and the second World Wars, I immediately realized a very interesting fact- that these photographs are probably the first comprehensive social documentary account of life in Malta between the two wars… Fürst main objective was to photograph the ethnic, the exotic and the mundane, which he documents with great artistry… I crave to go through his whole pictorial enterprise as homage to this great photographer to whom we owe a great deal showing us Malta in the past. Patrick Fenech, The Malta Independent on Sunday.

Condition: good, dedicated by the author