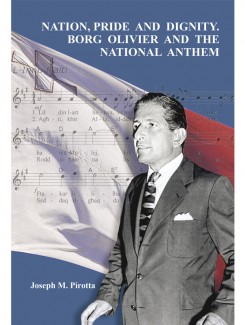 “Nation, Pride and Dignity. Borg Olivier and the National Anthem is another systematically constructed historical account, profusely annotated, written in an equally vivid and subtle style. It may be simultaneously defined as (a) a historical account of how difficult it was for Malta to attain some degree of official recognition for its newly composed national anthem, as well as (b) a portrait of a Maltese political leader seeking to introduce an agenda with an item much more controversial than an anthem: Independence itself. Prime Minister George Borg Olivier, about whom Joseph M. Pirotta has frequently written with great admiration regarding his political achievement and exceptionally calm nature, is here being proposed in a way which, however revered he has been for decades, must prove quite alien to many. An equally gentle and timid person, apparently submissive and actually irrevocably stubborn, the political leader whom Joseph M. Pirotta here succeeds in depicting so well, albeit through exclusively scientific methods, is a man deeply proud of his country.”

“Pride and dignity, with their positive and negative aspects, are two abstract principles to which most people aspire. Pride, when earned and limited to the upholding of one’s self-respect is commendable, but becomes condemnable when unwarranted by accomplishment or exhibited as evidence of an exaggerated sense of self-worth. Likewise dignity. An individual who retains personal dignity whatever his material circumstances deserves respect, but one who divests oneself of all dignity loses all claim to esteem. What is true of the individual is true of the nation. A nation’s pride and dignity do not rest on its size and material circumstances. They are earned by the sum total of its culture, its history of achievement, its fortitude in the face of adversity, its general solidarity, its continued efforts to mature and develop, and on its readiness to play a meaningful role within the international community.”

Be the first to review “Nation Pride, And Dignity: Borg Olivier And The National Anthem.” Cancel reply