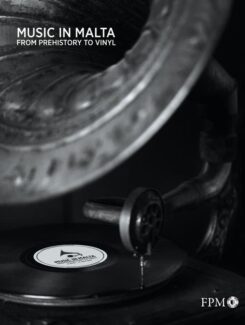 This book is meant to parallel the music exhibition organised by Fondazzjoni Patrimonju Malti at the Cathedral Museum in Mdina. However, it aims far higher and gazes much further than that. More than an in memoriam for a wonderful but transient event, it intends to help define, in a professional and passionate manner, one of the most fundamental components in the history of Maltese and Mediterranean culture: the impact of music and music-making on the formation of a national profile.

In Malta, like practically elsewhere, the earlier developments of music and their spread among the population still appear rather poorly documented. Apart from indigenous folk music, the larger part of the population would, for centuries, have had minimal exposure to music, or rather, to Music. Aesthetic aural deprivation remained the inescapable destiny of the masses for as long as the inventiveness of man had not discovered the recording, reproduction and long-distance diffusion of sound. Though we tend to overlook it, recorded music, the radio, the ‘talkies’ cinema, and television, revolutionised the permeability of music throughout the peoples of the world. Before technology stepped in, the majority suffered musical starvation; today exactly the opposite threat stalks mankind – musical obesity. Such an overwhelming assault of music from all quarters has produced a strong desensitisation of the intake of music, when up to a short while ago musical malnutrition was the more common fate of the majority.

The advancement of the diffusion of music in insular Malta never really trailed behind continental Europe. The Grand Masters dined to music, like other sovereign princes; when the castrato fashion swept most of Europe, Malta witnessed its own glut of castrati singers. Our major churches, like St John’s Co-Cathedral and the Mdina Cathedral, nourished their own competing musical cappella and furnished them with the best local and foreign talent they could afford; Malta had its own theatre, claimed to be the earliest surviving public theatre in Europe, where opera and musical divertimenti were staged, while the yearly Calendimaggio festival afforded a splendid opportunity for musicians, composers, and performers, to show off their talents.