Misunderstanding The Constitution – How the Maltese Judiciary Undermines Human Rights 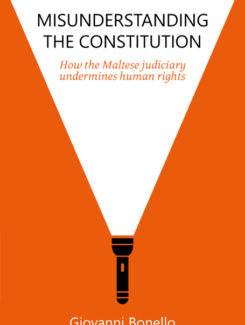 Misunderstanding The Constitution – How the Maltese Judiciary Undermines Human Rights

Misunderstanding The Constitution. How the Maltese judiciary undermines human rights.

The harmony of a democratic state is meant to be based on robust and effective checks and balances, foremost among them a vigorous, independent and impartial judiciary. Checking and balancing essentially means scrutinising, exposing and condemning excess, rather than becoming its spent and cynical accomplice. Since Independence, in moments of disintegration of civic values and of assault on the liberties of the individual, the judiciary often became the accessory of the abuser rather than its censor and its whip. Many never wavered in the courage of their servility. This publication is testament to that. If it is 24-karat gutlessness you are looking for, you need look no further.

This book is mostly about the Constitution – not a commentary on it, but a jeremiad about how it has been pounded, misconstrued, castrated, turned into the satire of what it was meant to be. I only selected a few instances in a sad litany of ineptness and defeat, of timidity and of vassalage, many of which left unhealed scorch marks on my own skin. It is not written particularly with constitutional jurists in mind, but it is intended to reach out to those, if any, who might still care.