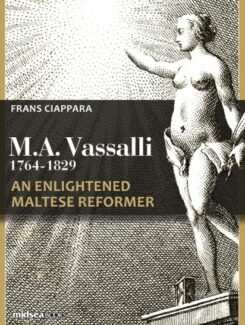 Mikiel Anton Vassalli (1764-1829)
Adversity assailed him continually but somehow he always succeeded to regain the fire of his youth, the best warmth of his genius and the greatest strength of his enterprising passion. We are in the presence of a giant individual, who displayed remarkable courage and daring, a brilliant mind and a great heart… Perversity diminished none of his defiant vitality and the fearlessness of his thought. He realised that his adversaries could take everything from him except his mind and heart. But he still had control over those things and he decided not to give them away. Only the lower classes were proud of their language and sang folk songs. But to claim for them any literary merit was to count merciless ridicule. Nevertheless, he continued to defend his mission just as a faithful soldier holds the post which has been committed to his keeping. He was the sole witness of the struggle within him and he could have ignored his conscience to go on. That was impossible because of all witnesses that was the one before whom this deeply human man most feared to blush.
By: Prof Frans Ciappara
Pages: 192