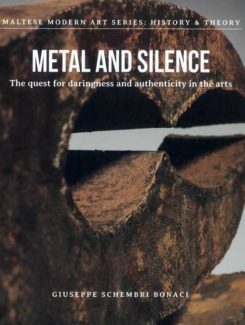 The quest for deringness and authenticity in the arts.

Previously thought of as ‘arte da manicomio‘ for its daring attempt to introduce radical new forms and the introduction of metal as an artistic material, Maltese Modern art has endured years of reticence and historical concealment precisely because it presents a disquieting situation to confront. In this book, Giuseppe Shcembri Bonaci innovatitely juxtaposes Modern art’s development in Malta with the concept of silence. The author enters into a number of vital albeit oxymoronic debates on the history of Modern art in Malta and its notable evolutionary qualitative leaps in the post war decades. The discussion enters into unprecedented spheres of knowledge to further entrench the study of Maltese art in the complex local and international contexts.

The second in the Maltese Modern Art series, Metal and Silence: The quest for daringness and authenticity in the arts, continues to pursue the revised methodological approach for the study of Modern art by critically questioning the attitudes towards artistic production during the twentieth century. Schembri Bonaci’s conclusions on artistic genius as separated from technical skill, on the alienation of art from human values in the contemporary era, and the argument that beauty has now become a subversive act project an intriguing dialogue between modernity and the present.

Be the first to review “Metal And Silence” Cancel reply